Château Ramezay – Historic Site and Museum of Montréal presents the exhibition As seen by Poirier - Montréal before, during and after the Second World War. Discover the daily lives of Montrealers in the 1930s, 1940s and 1950s, through carefully selected photographs by photographer Conrad Poirier.

Montréal before, during and after the Second World War

Just metres from the hustle and bustle of Place Jacques-Cartier, in the heart of the historic quarter, travel back in time. Let the photographs of Conrad Poirier immerse you in his Montréal, the city before, during and after the Second World War. Discover works illustrating sports and cultural scenes, and other more intimate and ephemeral moments of Montrealers of all ages and social classes. You’ll meet the gaze of Jackie Robinson, imagine you can hear the songs of Charles Trenet, and surprise Montrealers in the middle of their move, with comments by historian Jean-François Nadeau.

A photographer of his time

A pioneer of photojournalism in Québec, Conrad Poirier is best known for his published photographs in major newspapers and magazines of the time, including Le Samedi, The Gazette, The Montrealer, La Presse and La Revue populaire. Poirier specialized in capturing little moments in daily life.

Historian, journalist, and photography lover, Jean-François Nadeau selected and commented on 18 photographs chosen from among 23 000 images captured by the artist and that now belong to the public domain. This is the second time he has collaborated with Château Ramezay for an exhibition of this kind. In summer 2017, Château Ramezay exhibited reproductions from his book Montrealers: A Story in Portraits (Juniper Publishing).

Each summer, Château Ramezay offers a selection of archival photographs on Le Royer and Saint-Claude streets. This free outdoor photo exhibition runs until November 3, 2019, behind the Château’s garden, between Place JacquesCartier and Marché Bonsecours.

The Château Ramezay – Historic Site and Museum of Montréal, is a non-profit organization which safeguards and makes accessible a collection focused primarily on the history of Montréal and Quebec.The Château was the first building in Quebec to be classified an historic monument. It is the oldest private historical museum in the province.

Montréal, March 26 - WAR FLOWERS — A Touring Art Exhibition now showing at Château Ramezay, will be extended until January 5, 2020.  Almost one million people have seen the exhibition since it was launched at the Jardins du Métis in 2017. It was  originally scheduled to end on January 5th. The extension will give Château visitors a further opportunity to experience a unique exhibition. 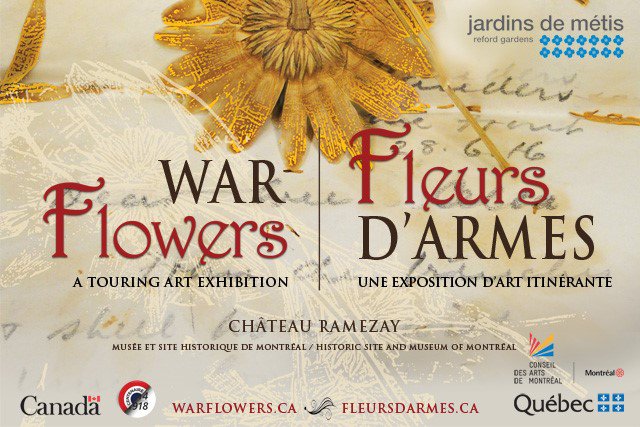 What People Are Saying About WAR Flowers: http://bit.ly/2DM43t7

Montreal, Quebec, October 30, 2018 – During the First World War (1914-18) Canadian soldier Lieutenant-Colonel George Stephen Cantlie picked flowers from the fields and gardens of war-torn Europe, pressing and drying them within a book. Every day, he sent one flower home, along with a short, affectionate note to one of his children, including his one-year-old baby daughter Celia in Montreal, so that, as she grew up, she would have something to remember him by in the event he didn’t survive that terrible war.

Flash forward. A century has passed, and with it all living memory of the First World War. But Cantlie’s letters and flowers have been preserved and ultimately passed to his granddaughter, the late Elspeth Angus, in Montreal, who lovingly preserved them in a special red box. And that’s where, four years ago, a Canadian filmmaker, Viveka Melki, to her utter amazement, first encountered them, speaking to her from the past, and the germ of an idea was born in Melki’s mind.

Now, more than one hundred years after he picked the flowers, and on the 100th anniversary of the end of that horrific conflict, Cantlie’s touching wartime ritual can be experienced anew in WAR Flowers – A Touring Art Exhibition, now running through January 5, 2020 at Château Ramezay - Historic Site and Museum of Montreal.

“WAR Flowers”, developed by exhibition curator Melki and produced by Les Jardins de Métis/Reford Gardens (Alexander Reford, director) in Grand-Métis, Quebec, is an art show presenting Cantlie’s original century-old preserved letters and flowers, but only as a starting point. From that, Melki has created a multi-sensorial, emotionally-involving vision of the effects of war on all who experience it personally. The exhibition provides visitors with a unique, immersive experience centred around Melki’s intense personal belief in the resilience of the human spirit.

Each station also profiles a Canadian of The Great War era who exemplified, through their personal story, one of curator Melki’s ten core beliefs about war. WAR Flowers features John McCrae, Georges Vanier, Elsie Reford, Jean Brillant, Talbot Papineau, A.Y. Jackson, Percival Molson, Julia Drummond, Edward Savage and George Stephen Cantlie. The links between these individuals provide diverse perspectives on the Canadian contribution to the war effort. All these men and women had strong roots in the city of Montreal.

Other members of the WAR Flowers creative team are Céline Arseneault, botanist and librarian for over three decades at the Montreal Botanical Garden, who oversaw the conservation and mounting of the fragile 100-year-old flowers and letters; Normand Dumont; the exhibition’s designer, who transformed Melki’s creative vision into a unique, sensory and physical reality for exhibition visitors; Marie-Claire Saindon, the exhibition’s music composer; and Claude Langlois, creator of the sound montage.

Complementing the exhibition is the dedicated website www.warflowers.ca, featuring profiles of the artists who created the elements of the show and offering behind-the-scenes access to the design process.

“Château Ramezay is excited and proud to be hosting the remarkable ‘WAR Flowers’ exhibition in Montreal,” said André Delisle, Executive Director and Curator, Château Ramezay. “This exhibition has already been a huge popular success, emotionally moving tens of thousands of visitors during the first four stops of its tour in Canada and France. Now it reaches its final destination, ‘coming home’ in the truest sense, to Montreal. ‘WAR Flowers’ is a jewel of a show, and an imaginative, innovative example of the power of art to enrich and transform our understanding and experience of history in unexpected ways.”

The exhibition is presented at Château Ramezay from October 24, 2018 to March 31, 2019. This will be the final stop for the exhibition on its five-location tour that began in June 2017 at Les Jardins de Métis/Reford Gardens in Grand-Métis, Quebec, and then travelled to the Canadian War Museum in Ottawa, Campbell House Museum in Toronto, and the Visitor Education Centre of the Canada Memorial in Vimy, France.

WAR Flowers: A Touring Art Exhibition curator Viveka Melki (pron. ViVEKa MELkee) is a Canadian filmmaker and screenwriter. She has lived, worked and travelled in cultures where repressive regimes are dominant. From these experiences are born her projects around conflict - and the capacity of the human spirit for resilience. Reflecting on the subject of war, she says: “My goal as an artist is to tell history using the tools of our time. Our voice as artists in this era is unique. How we look at history, our understanding of the past, determines and defines the attachment to that story by audiences today. I bring my film experience into all my work so, in the end, I am a storyteller. I alwa–ys ask one question when looking at Canadian history - what did it feel like? And if we can capture a fraction of that and bring you into that experience, then we have succeeded.”

Born in The Gambia, West Africa of Brazilian/Lebanese descent, and educated in the UK before immigrating to Canada, Melki sees the world through a multicultural lens. In 2014, she directed the two-part series War Correspondence (Radio-Canada, RDI). Her feature-length documentary After Circus (2015) received acclaim after screenings at several North American film festivals, including Hot Docs in Toronto and the Rencontres Internationales du Documentaire de Montréal, as well as at the prestigious Sunny Side of the Doc Festival in La Rochelle, France. It was broadcast across Canada on CBC’s documentary Channel in June 2016.

Viveka is currently working with the New Chapters Canada Council for the Arts on her new docu-animation, Alouette, about the Asia-Pacific experience during the Second World War. She is also directing a new docudrama feature, “The Fence”, on the Battle of Hong Kong, for documentary Channel. http://vivekamelki.com/

Around the Fireplace… Holiday Traditions

Montréal, November 26, 2019 – Once again, the Château Ramezay offers visitors a variety of fun during the festive season! Get the family together and re-acquaint yourselves with old-fashioned holiday traditions thanks to our entertaining exhibits and activities! Stock up on memories and stories you can share with family and friends!

Around the Fireplace… Holiday Traditions

From November 30, 2019 to January 5, 2020, five of the Château’s fireplaces will be sumptuously decorated to explain the origin of certain Christmas traditions: Christmas cards, Christmas stockings, Advent calendars and more – there’s lots to be learned around the fireside!

Only the Château Ramezay offers this activity! Children who hang a stocking by the fireplace can come back in the New Year to see what Santa has left them - but they’d better be good!

Bread was definitely the most widely-eaten food in New France. To highlight its importance and see how it was made, young and old are invited to try their hand at making, baking and tasting some colonial-style, sweet, bread.

Dress up as a settler or a fur trader and pose for a selfie in the historic decor of the Château Ramezay. Use your own camera or phone.

Don’t forget to stop in at our gift shop! How about a cookbook of recipes from New France, or some traditional sweets for your sweetie?! Better yet, give friends and family tickets to explore the Museum themselves or even a Château Ramezay membership! Make sure they don’t miss a single one of our fascinating exhibitions, including the ongoing “WAR Flowers - A Touring Art Exhibition”.

Montréal, January 9, 2019 - The Château Ramezay – Historic Site and Museum of Montréal is on a recruitment drive! We are looking for volunteers interested in sharing a love of history with students and visitors to our beautiful city. Anyone interested is invited to come to the Château on Monday, January 28, 2019 between 10 a.m. and 2 p.m. Our volunteer guides will be on hand to share their passion and answer questions.

Me, a volunteer guide?

Why not? You don’t have to be a historian or even bilingual! All you need is a love of learning and the desire to share your knowledge with others, as well as availability a few hours per week. If you also happen to be interested in the history of Quebec and of Montréal, you’d be an ideal candidate! We offer a detailed training program after which you will be teamed up with an experienced guide until you are comfortable with the ins and outs of guiding!

For sure! As a guide at the Château Ramezay, you risk making new friends! Volunteer guides are divided into two groups, Anglophones and Francophones, some 100 people in all. Each group offers on-going training, excursions and special events over the year. Some volunteers have been with the Château for up to 25 years! Questions? Come to the Château between 10 a.m. and 2 p.m. on January 28. You can meet up with our dynamic team – there’s no better way to get your questions answered! Information is also available on the “Donations and Volunteering” section of our website: www.chateauramezay.qc.ca

Back to Press Room